The Dojo etiquette is defined as the behavior expressing politeness and courtesy. It’s a respectfully attitude towards others and dictated by the traditional martial arts. The greetings are one of the expression of this spiritual state.

The ceremonial is very important to keep the Dojo etiquette alive. It consists of a set of traditions, rites and symbolic moves which are creating a special atmosphere to practice Martial Arts. The Dojo is a place where we train the body as well as the spirit; it’s the source of concentration and mutual respect.

Each disciple must respect his master but also all the oldest persons or who has an higher degree. They deserve our admiration due to their continuous efforts and their patience, they were able to obtain a higher rank.

The etiquette is designed to make sure everyone goes along and is feeling well. The act of being respectful is not imposed as an act of discipline with the scope of hardening students. We are polite with each other to ensure everyone is at ease, and no one should ever feel uncomfortable because he doesn’t know which behavior to adopt.

Observing the etiquette doesn’t makes us better through discipline but by allowing us to be friendly with others. A beginner might find the gestures and ceremonials boring, but, he will quickly discover that the etiquette improves social relationship. A polite attitude with others and a good posture are the key elements for a good atmosphere during a training.

An example to explain on of the Dojo etiquette aspects is how the different members of the club are positioned before and after the lesson. In a traditional Dojo, a little spot or Shinto is dedicated to the veneration of divinities. The Senseï (who was born before) stands near it facing his students. On this altar, we can usually find a representation or picture of the founder, a citation or even a calligraphy expressing the club philosophy or ethic. Students are placed, from left to right, from the lowest to the highest degree. The order of ranks is represented by the below picture. The Sensei’s assistants and all black belts are standing along the right  wall; as well as the honor guests if present. 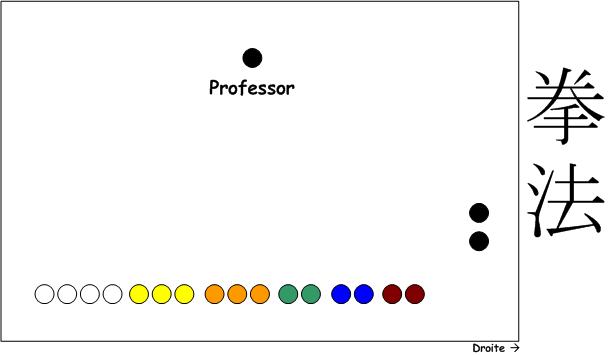