In Shin Gi Tai Kempo, the action done on the opponent is done by working on the various strength lines which is a concept of dimensional pattern of movements including height, width and depth. Yet, the main objective is to break the distance in between the fighters to be able to enter in the attack.

The concept of “strength lines” or “force lines” is quite difficult to understand for a neophyte; even if it’s based on logical body motions and bio-mechanics, which need practice to be able to fully master.

With this optic, Ed Parker created the Universal Patch or Pattern. This design is a representation all angles and paths of movement used within the Kenpo Karate techniques. The drawing is used to illustrate Kenpo concepts and principles. The pattern on the patch is a one-dimensional geometric symbol composed of circles and lines; yet, to really understand how it works, it should be imagined as a three-dimensional structure. It’s divided has a number of levels and every Kenpoka should picture himself standing in its center. The straight and circular lines should be familiar to everyone practicing Kenpo; and should obviously be able to recognize the eights forms within the pattern (explained here below). The patch helps understanding the interrelationship between linear and circular movements along the paths that they follow. This is an essential concept to master all forms and techniques. The patch should be worn on the left sleeve of the uniform, aligned so that the heart shaped pattern is upright.

1. The Eight Angles: A multiplication sign laid over an addition sign could be used to show the eight major directions that someone could attack or defend from.

3. The Diamond: A geometric path.  An example would be the inward block used in Alternating Maces traveling on a downward diagonal path.

4. The Circle: A circular motion.  It could be found by following the line the foot travels on in a roundhouse kick, or the footwork in Brushing the Storm.

5. The Oval: An elongated circle. It could be found in Snapping Twig or Locked Wing.

6. The Figure Eight: A geometric line seen as in Dance of Death where the right hand is making a figure eight with the back knuckle strike to the left knee followed by the hand sword to the groin. It could also be seen as following a path of action in Snaking Talon as the whole forearm uses the figure eight with the inward and outward hand swords.

7. The Overlapping Circles:  A movement that can be found in Circling Fans.

8. The Heart: A shape that can be found in Blinding Sacrifice, Fatal Cross, and Locking Horns. 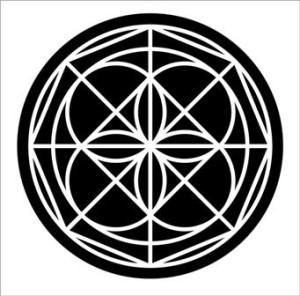 You can read a good article by clicking here.